Julia Thorell (SE b. 1984) works as an illustrator and graphic novelist. She was educated at Konstfack, Stockholm, receiving her BA in 2010. Thorell has published two books: Juni (2012) and Fri Kärlek (2013). Juni was nominated for comic book of the year in Sweden. 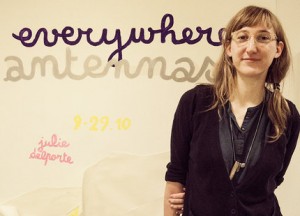 Julie Delporte (FR/CA b. 1983) is of both French and Canadian citizenship, living currently in Montreal. She publishes graphic novels, children’s books and zines. She is the author of Everywhere Antennas (2014) and Journal (2013). She has published a French children’s book Je suis un raton laveur (2013) along with some short pieces in various anthologies. In addition, Delporte runs a comics-centric radio show in Montréal.

While interviewed, the Danish comic artists Bue Bredsdorff and Allan Hansen still enjoy the warm May of Helsinki. Bredsdorff and Hansen applied for the CUNE-Comics-in-Residence Programme in Helsinki, and the result of their residency is the exhibition Kaupunki ja karhu (“City and the Bear”) in Helsinki Comics Center’s gallery. Bredsdorff and Hansen also use artist names Bue B and Ursus, and their work have been published in zines, anthologies and small magazines.

Bredsdorff and Hansen met each other in the Malmö comics school, when Hansen wanted to start a critical discussion group for people interested in new comics and the future of the scene. Bredsdorff noticed Hansen’s advertisement about the group and joined.

During their residency, Bredsdorff and Hansen tried at first to do both writing and illustrating together for their exhibition. However it became difficult to make a one story in collaboration, so the artists decided to do their own comics separately. Kaupunki ja karhu tells about the collision of city and the nature and also about the collaboration and artistic process of the artists.

– What our style has in common is details. We are used to critiquing each other’s works. I usually always show my works to Bue first, because the points he makes are always sound. The making of this exhibition and applying for the residency was a very good idea! Hansen says.

– It’s nice that you have company in a city you don’t know. It’s nice to share the experience, Bredsdorff says.

“Finland has a great comics scene”

The two Danes are impressed by the leading comic country of the Nordic countries.

– We came to Helsinki, because we wanted to make a comic about the city. Finland has a great comic scene and is present at nearly every comics festival we know. We don’t have a scene like that in Denmark and no comics center. The Copenhagen Comics festival is held only every other year. I went to comics shop in Brussels and in their Nordic section two thirds of the comics were Finnish, and only the remaining third Norwegian, Swedish and Danish, Hansen says.

– My works have been published last summer in KutiKuti’s Denmark-Finland issue that came out at the Copenhagen Comics festival, Bredsdorff says.

– There are three comic shops in Copenhagen and you can get KutiKuti in all of them. There are bestseller, mainstream comics in the main library, but hardly anything alternative, Hansen says.

– There’s only one blog focusing on comics in Denmark, and maybe once or twice a year newspapers write something about comics. The Danish comic scene is very small and closed community. Only few artists manage to get published. There are no Danish anthologies, Hansen says.

Bredsdorff draws mainly buildings, architecture and infrastructure. Having once studied geography, Bredsdorff has an invested interest to observe his surroundings by drawing.

– I draw buildings and spaces without people, because I’m interested in environment and little things that surround us in everyday life and that we take for granted. I want to freeze time and the feeling of the places, Bredsdorff says.
– I draw things how they are seen, in first person and realistically, like a documentary. Though I still want to leave some ambiguity for the readers to interpret by themselves.

The works of Bredsdorff in Kaupunki ja karhu continue Bredsdorff’s architectual and geographic themes, because they tell about abandoned villas of Kruunuvuori.

At the moment Bredsdorff works on a trilogy about the places where he has lived. The first part of the trilogy, little black and white book Huset i Sønderhå, tells about Bredsdorff’s childhood home in the little village of Sønderhå. Bredsdorff has published the story also on his tumblr blog and KutiKuti in English. Huset i Sønderhå is nominated at this year’s Pingpris awards in Denmark for best Danish comic debut, and the winner will be announced 7th of June.

– I think I have to start thinking about writing the winning speech soon – or a loser’s equivalent if I don’t get it, Bredsdorff jokes.

The second part of the apartment trilogy tells about Bredsdorff’s Copenhagen city apartment.

– The third part will tell about this garden allotment cottage me and my brother are building. It will be called Home and as the name implies, it tells about building your own home.

Bredsdorff also plans to release a Christmas book for the holiday market.

Followed by a bear

Hansen started making comics, because he wanted to draw something personal.

– I have an urge to draw my history and my own experiences. I want to make stories that relate to reality, but contain also some fantastic sequence of events or the like.

– Everytime I travel to a new place, I try to make a short story about the people or funny events I see on the streets. In Stockholm I saw a man in a suit, carrying a suitcase in one hand and a fish in the other, and I made a story about it.

Hansen’s story in the Kaupunki ja karhu exhibition tells the story how the bear statue of Kallio’s Karhupuisto (Bear Park) ended up there. The bear character has appeared in Hansen’s earlier works as well and his pen name, Ursus, means bear, so the character works as an alter ego.

Hansen works currently on two book projects in Denmark. One project, Christina Leonora, is a graphic novel about the oldest novel in Denmark called Jammers Minde. Princess Leonora Christina Ulfeldt wrote her autobiography Jammers Minde in the 17th century while imprisoned for 20 years and accused of taking part in her husband, Corfitz Ulfeldt’s plans of treason. The manuscript for the autobiography was not found until 200 years later. Book has been praised for the realistic description of the bleakness of captivity.

– Reading Jammers Minde I felt like I was in prison with her, which is a sign of a good book, Hansen says.
Hansen is also making a children’s book Ly Ö, which is about a man looking for a troll on an island and all the adventures taking place there.

– I have made a contract with a small publishing house about making three children’s books.

Hansen has studied Nordic languages in Copenhagen and taught Danish to foreigners. This year Hansen has started doing comics full-time, but he’s also releasing a Danish pronunciation book soon. Hansen is also interested in the Finnish language, and has in the past taken a 3-week Finnish course in Vaasa and likes to practice his skills.

Bredsdorff and Hansen have enjoyed Helsinki very much. Hansen had already visited Helsinki once before, but Bredsdorff saw the city for the first time. The two Danes have visited the districts of Kallio and made a short jaunt into Tallinn as well. They have also visited the exhibition of the most famous Finnish comic artist.

– We recommend Tove Jansson’s exhibition in Ateneum. It is the greatest solo exhibition of a comic artist that we’ve ever seen.

Bue Bredsdorff has been reading and thinking about comics most of his life. After years of procrastination he finally started making his own comics a couple of years ago. Bue graduated in 2011 from the international comic school Serieskolan in Malmö, Sweden. His comic Huset i Sønderhå was published in October 2013 by Max Press, and an extract from it appeared in the Finnish magazine Kuti Kuti in June 2013.